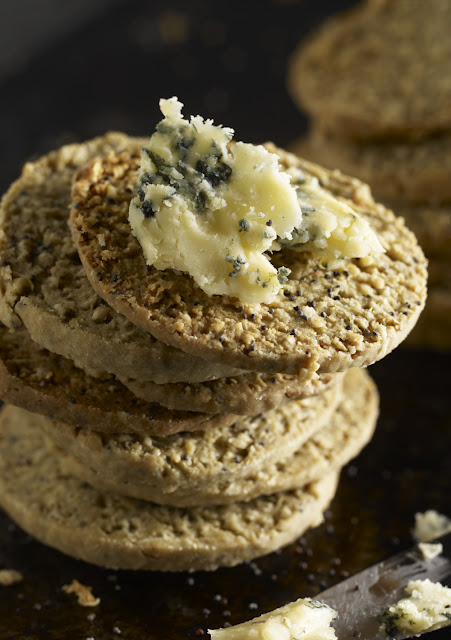 For anyone who missed out on my recent postal mailer, here's the recipe for some rather special stilton and poppy seed oatcakes inspired by some Cropwell Bishop stilton I found in the studio fridge!
If you'd like to be on the mailing list drop me an email.

Mix all ingredients except water in a blender, finally adding water
in a steady trickle to make a lump of sticky dough.
Turn and scrape out onto a floured surface.   Knead gently to
remove any trapped air.
Roll out to a thickness of approx. 3mm and cut with a biscuit cutter.
Or, roll into a fat cylinder shape to the diameter of your preferred
biscuit size, wrap in cling film and chill for an hour or two.
Then remove from fridge and use a sharp knife to cut into thin slices.
(To keep the mixture cool cover the block you are cutting from with
a tea towel.)
Place on a baking sheet (probably 2) and put into hot oven for 20-25
minutes until beginning to turn golden brown.
Remove from oven and cool.
Store in an airtight container until required.

Wonderful with a bit more stilton and some juicy pears!

At the end of March I did a test shoot with RKCR Y&R for M&S's new (press) advertising campaign featuring their value range.   Do you remember March? - beautiful long cloudless sunny days....   We shot one Sunday using the lovely directional daylight from my studio window and on the Monday got the go-ahead from M&S!

By April the weather had gone into gloom mode but we still captured a sunny feel, working to some interesting "book end" crops along with regular single and dps formats.

The TV campaign launched on the 12th May and the press ads have been rolling out since the 14th with a lot of the pictures also in-store.   I have been loving working on it - with a great team.

Here are some of the images:

All the above shots commissioned by RKCR Y&R for M&S - Art Director Paul Angus.   Food styling by Katie Giovanni, Props styling by Penny Markham.
Posted by sue in the garden at 09:17 No comments:

From the sublime to - well, this did seem even a bit more over the top than usual.

In 2010 Brand Opus asked me to shoot a series of shots for Twinings Black Tea range.  I do a lot of fruit shots - which I love - and often creating the composition can be challenging, especially when we are using real fruit, which I like to do whenever possible.   There is usually at least one ingredient it's hard to get your hands on - in this case real tea leaves and vanilla flowers.   But the brief for this was unusual in that a range of different crops were required to be used from the same image.   So, the only way this could be achieved (avoiding massive retouching) was to shoot one large composition which covered off all the crops.

In the visuals the fruit looked to be piled up and overlapping so I decided to shoot from above, allowing gravity to help rather than hinder, and also to give me the opportunity to light from the sides for the correct subject lighting and also from underneath to allow for a clean cut out - on all sides if needs be.

But it wasn't until we started constructing that we realised quite how many layers of fruit some lovely (and still nameless) designer had actually visualised.   The set just kept growing and growing as we all held our breath but happily there were no mishaps.   Thank heaven for all those games of pick-up sticks I played as a child! 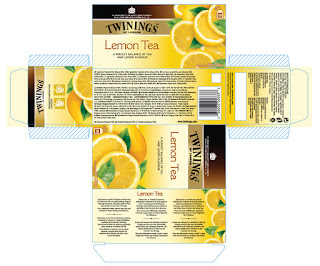 Thanks also to Alan Dunn (for flowers) Denise Smart and Dagmar Vesely. 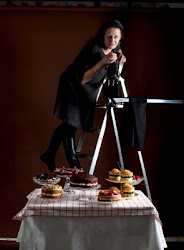